Preparation of an extraordinary transatlantic crossing, from West to East

On 13th November 2019, I was scraping the ice off the deck of La Vagabonde – the Outremer 45 – in preparation for our imminent departure from Virginia, USA headed to – well – somewhere in Western Europe.

Eight days earlier, I was in central London when I received a message: “Nikki meet Greta”.

The headline: Svante and Greta Thunberg have been offered a ride by an Australian couple on their catamaran. It’s a boat called an ‘out-ree-mer’ – read out loud by myself in the most insulting British interpretation of the word ‘Outremer’. Professional sailing help needed urgently to bolster the crew. In other words: “Nikki. Swap your jumpsuit and heels for a drysuit and boots. You have 24 hours to decide.” Not a bad offer…

Fast forward 1 month, I was in a hotel room in Lisbon enjoying a few amusing hours scrolling through various online cruiser forums.

Despite the endorsement by renowned yachtsmen such as Jimmy Cornell and Sir Robin Knox Johnston, professional (and armchair) opinion regarding our voyage was mixed.

It amazes me how much more strongly opinionated people are when they sit behind what they conceive to be the impenetrable protection of the internet. Judgements aside, I came across an excellent question:

“I am curious about the preparations made prior to the crossing. You don’t just wake up one day and say let’s sail to Spain.”

How in fact did I find the confidence to step onboard, slip lines and set sail for a 3000 mile unseasonable crossing on a boat I did not know with a crew I did not know?

Any sailor who has embarked on an ocean crossing will tell you: it’s a process that can easily take months, even years to be prepared for. Boats have this tendency of adding two things onto the end of the ‘To-Do’ list for every one you cross off. Endless maintenance, victualling, checks, fixes, adaptations… Perhaps we are foolish to even try to be ‘ready’ when we are about to work alongside the worlds’ most unpredictable being: Mother Nature.

But we did indeed make it safely. A great believer in learning from experiences – and mistakes (!) I thought that in my debut blog for you all, I’d break what happened in those five days. I’m sure at some point, we will all end up in a similarly last minute departure scenario.

To begin: teamwork. Lots of it. Let me explain…

In comparison, we had 7 people (not including other hired professional help: rigger, engineers, divers, Outremer team etc) working flat out for five days, 7am to 7pm (weather windows don’t stop for lunch breaks!), sometimes more.

Hours covered; how did we fill them?

I recommend following this pre-departure in-my-head mind pattern that I often use:

3. Create crisis management plan for each.

4. Stock the boat with equipment to assist crisis management plans.

5. Stow the boat in accordance with crisis management plans

The first day I arrived Riley sent me down into the port bow compartment to finish his solution for securing the outboard: four D-rings mounted on wooden chocks to be bonded to the hull. Two hours sanding, cleaning, and waiting for glue to dry (literally) was an excellent way to get to know my way around the locker.

Bow compartments often leak first, but I found no evidence of water pooling or staining inside; good sign. Grounding or collision would have possibly affected this area (pointy end), but I found no deformation, delamination or hairline cracks; another good sign. The space was organised, labelled, and no scratches on the wall, so clearly Riley and Elayna kept a relatively tight ship; good sign!

Whilst bonding with the port bow, I considered a scenario: hitting a container. Something almost entirely out of our control, likely catastrophic, and difficult to manage short-handed.

Epoxy drying, I got onto Google. Aha! I did indeed appear to be hanging out in none other than one of the four watertight crash bulkheads. Excellent – particularly excellent that it appeared to still be watertight. In theory, we could hit a container, lose an entire section of the bow of one of the hulls and still float. If we hit a container at force then damage to the rest of the hull from the shock was also a potential concern. But I read that the internal structure of the Outremer is laminated into the hull. This meant that catastrophic internal damage to sections further aft were less likely than I initially feared. This explained the lack of spider cracks despite La-Vaga having sailed 30000 miles or so already. Finally, (to state the obvious) we had two hulls. As a monohull sailor this was of course a major and unusual bonus to have! I’d taken 100s of people to sea on yachts that were in theory twice as vulnerable to damage from semi-submersed objects.

Riley and I put together a hull damage/water ingress shopping list, which included generous quantities of underwater epoxy putty. We checked the life raft: our worst case scenario plan of the worst case scenario! It was secure, easy to launch, and we planned to board it from the aft deck. There was slight anxiety of having to be on the bow to deploy it. I think if I were lucky enough to become an Outremer owner, I would consider creating some sort of trip system so that the life-raft was deployable from the aft deck.

Finally, we hired a diver to scrub the hull and then check for any cracks, damaged seals, thru-hull fittings, and anything else that looked out of turn. He took a camera down with him and filmed his checks. If there had been anything we were concerned about, we then had the option to send the video to Outremer HQ and let the real boat builders decide.

We repeated the above with all key areas onboard: the rig (check deck, aloft, angle grinder, saws etc), the electrical systems (check main panel for corrosion, bilge pumps & wiring, power modes, solar, hydro), watermaker (serviced and on all power modes), engines (serviced by acredited Volvo rep), comms and weather (tested systems including 2 sat-phones, liased with world-class routers), sails (hoisted), medical (reprovisioned according to crew), and even made some Lenny-proof changes. It was a busy five days!

Five days is also short for preparing people. What about the more emotional side of pre-crossing preparation? How did we justify it in our own heads?

Previously, I’ve found that normally this process is a long one: running through lists in your head; conversations with fellow sailors every night for weeks; reviewing forecasts, routings, checklists, salty tales and storm tactics. But we didn’t have four weeks. We had five days.

I asked myself: were we crazy to be confident? Were our critics right?

A well-known phrase for any RYA yachtmaster examiner deliberating passing a candidate is: “Would I feel comfortable letting my kids sail with them?”. That Riley and Elayna were prepared to go with their infant was a sign in itself that they had confidence in their boat and themselves. The fact that they lived aboard also consolidated me; it’s hard to miss major issues when you are living afloat 24/7.

I realised we all had more to lose than to gain: Outremer had their reputation; we all had our own lives – of which mine (not famous) was probably the least significant; other professional sailors who had also volunteered had decided it was a safe ‘enough’ crossing for them.

Without a doubt, the biggest challenge in preparing a yacht to go to sea – in five days or five weeks – lies in deciding what is enough. When to stop. What not to take with you. What not to do. When does the to-do list of preparations end? Could you ever be ‘too’ prepared – well.. you could be very late for COP25! 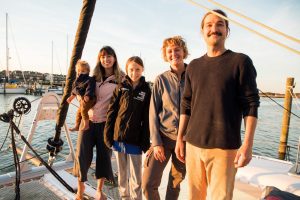 Sitting on the starboard side of La Vagabonde on that departure day – sun rising – ice now melting – I felt those familiar butterflies. “Have we done enough?”

Svante was beside me, watching the instruments. 20-25 knots of wind – fruity, but manageable. I considered how he must be feeling. A father entrusting the safety of his daughters’ life to three strangers. My sense of duty stung me right between my eyes. The weight of responsibility sits heavily until the lines are tied on the other side. But ultimately, as we all do – I had to trust. I had to have faith in our five days. I had to believe we had done enough.

Behind the scenes: a tour of Outremer’s shipyard

Tour the Outremer shipyard through the eyes of Nikki Henderson. Moulding, lamination, composite sandwich construction, resin-to-glass ratios; these are words that can send me into fight or flight mode… 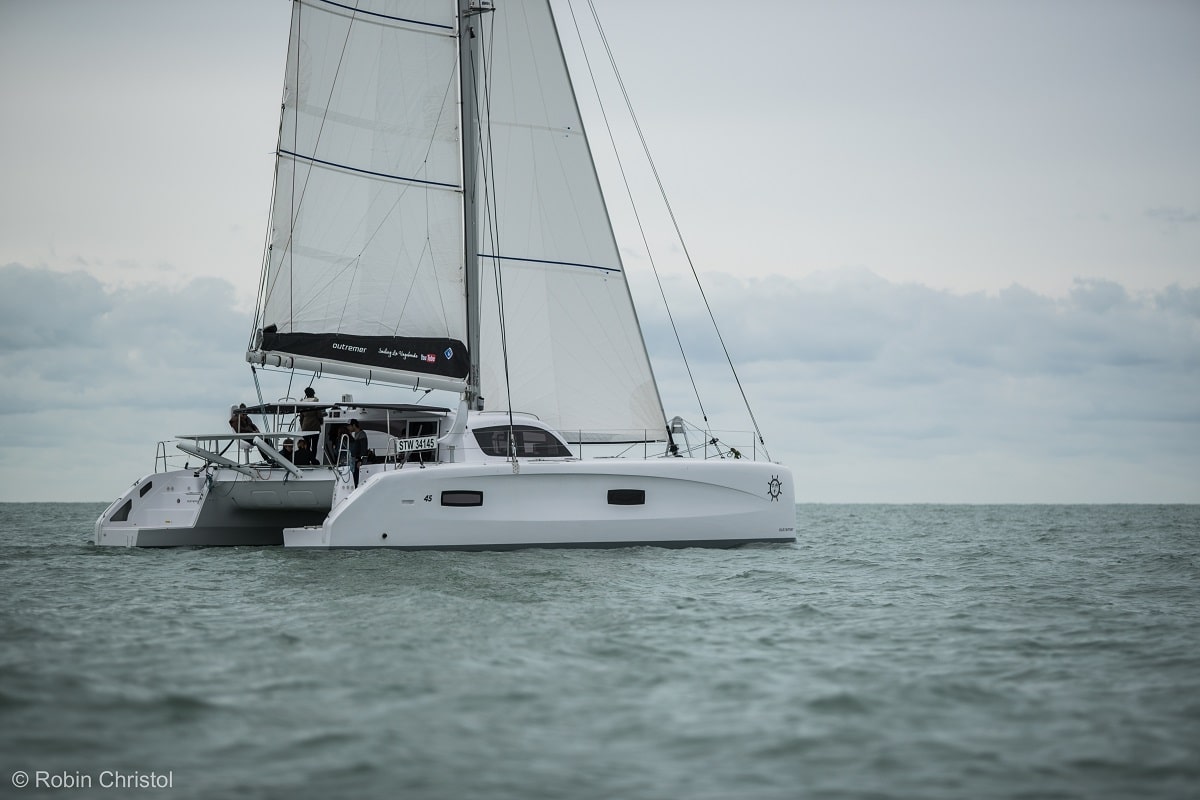 When I look back on the crossing on La Vagabonde, my brain does a remarkably clever thing. It filters out most of the hard stuff: the lightning, the stress, the responsibility, the social media flurry, the awkward moments between the diverse characters. What’s left, is memories of day 12 onwards…

The Vendee Globe has got to be the toughest solo sporting event there is. It’s a single handed round the world sailing race without stops or assistance. Having raced in the Southern Ocean myself – it is a desolate place in spirit, in physicality, and in the mental state you find yourself in.